Sometimes that brake squeal is your fault. You were an idiot and you used some spray lube on your chain and the overspray touched your rotor. Or worse, maybe you religiously clean your bike with a silicone based bike polish and the overspray touched your rotors. If that’s the case then I’d suggest acknowledging that you may have OCD and go seek professional help. But that’s not what this article is about. There’s lot of information online about torching your pads and rotors to get rid of the bullshit you got on there. This article is about solving that brake squeal when it isn’t your fault.

So what happens? Usually a slow leak of brake fluid at the caliper. While this may be possible on any type of disc brake caliper, I’ve only seen it happen consistently on Shimano brakes. It doesn’t matter what part of the world I go to, I’ll deal with dozens of these caliper leaks per year. Guaranteed. Go to any shop and there will be one brand new bike on the shop floor with squealing brakes that also doesn’t have any stopping power. And it’s a Shimano every time. There must be tens of thousands of brakes with this problem around the world and it’s been going on for so many years. Talk to any shop person and they have no idea what causes it or how to fix it other than ‘warranty’ or ‘replace it’. Talk to any Shimano representative and they claim they’ve never heard of the problem. Bad Shimano. Really really bad. Almost conspiracy level bad. Which is too bad because other than that one problem, they make some of the best brakes in the industry right now.

Anyway so onto the cause. Here it is circled in red. 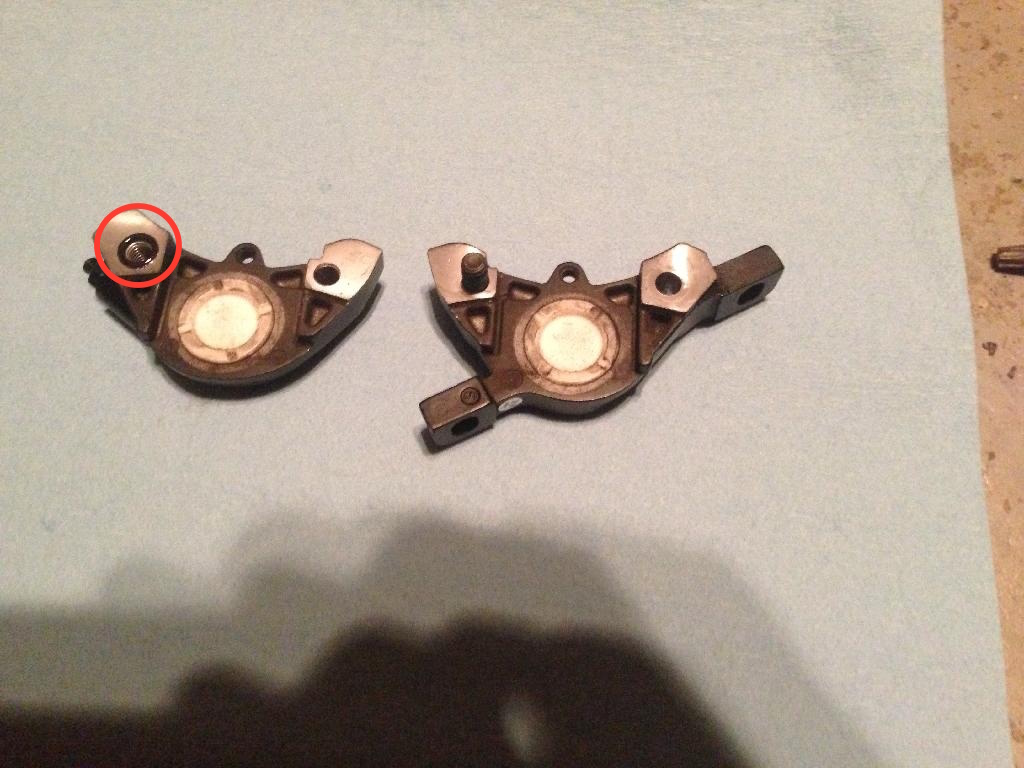 What you have to understand is that most calipers are 2 pieces bolted together. That means that there needs to be a fluid transfer port so that both halves of the caliper can have fluid pressure to push their respective pistons. There’s a little o-ring inside a recess right at the fluid transfer port. In most cases I’ve seen with a slow leak on a Shimano brake, this is where the leak comes from.

How do you solve it? You need one of these. 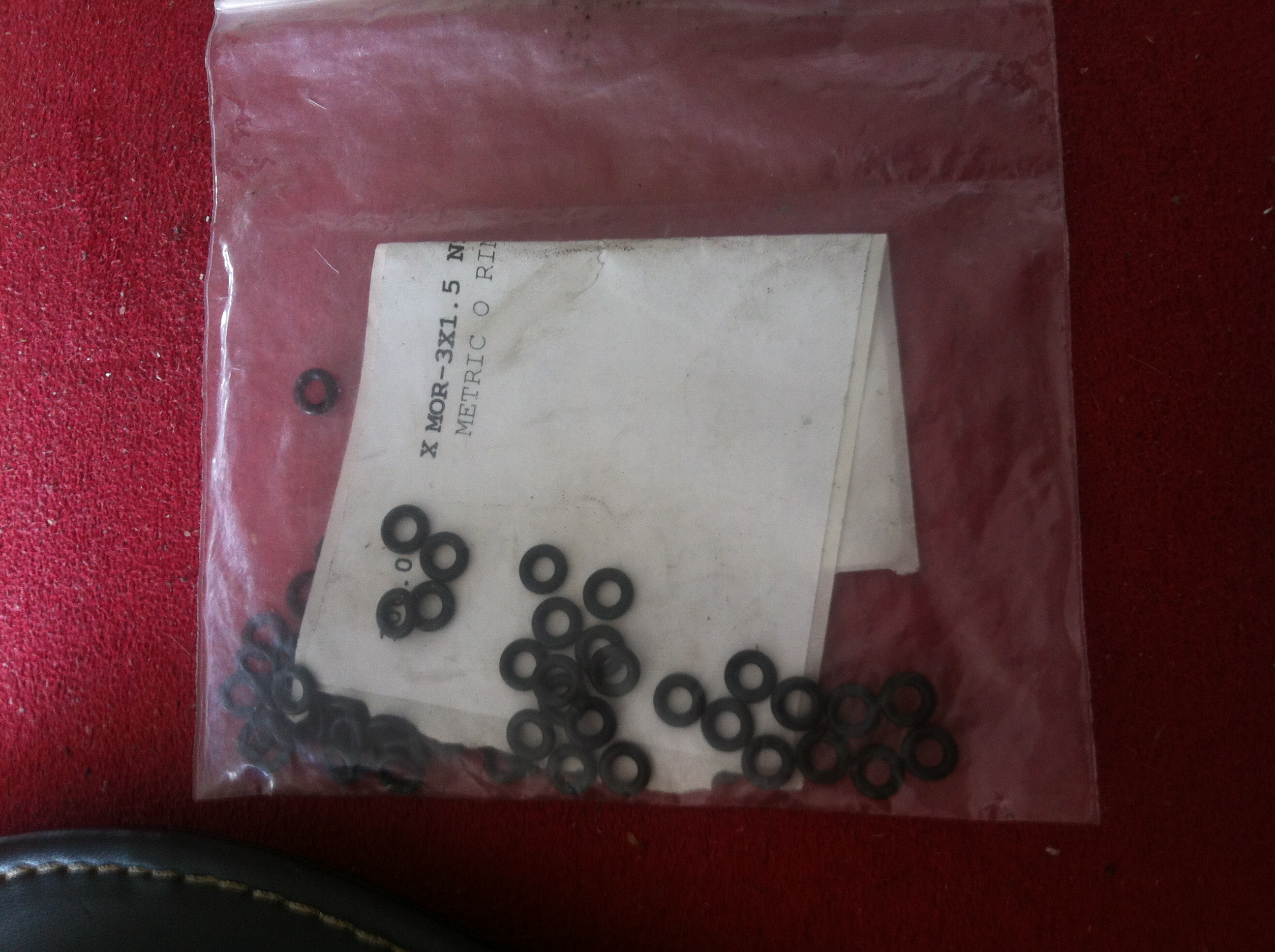 You need the same size of o-ring that’s in there but a harder durometer. A slightly thicker one would work too but there’s limitations on o-ring sizes that you can buy off the shelf. The next size up would be way too big. So why does a harder o-ring seal better? 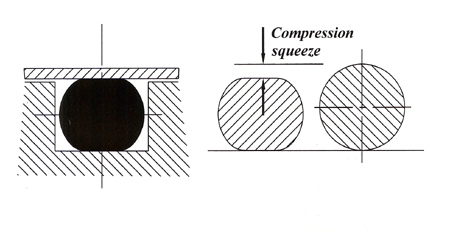 When you tighten down the 2 machine screws that hold the 2 pieces of the caliper together, it squeezes down on the o-ring that’s at the fluid transfer port. The way an o-ring works is that when its squeezed, it’s springy enough that it provides a bit of return force onto the wall of whatever is pushing against it. That return force is what provides the seal. In the case of so many Shimano brakes, the o-ring gets squished and doesn’t push back. We need more push back which is what you get with a harder durometer o-ring. The stock o-rings are made of Buna 70 durometer compound and the ones I replace them with are Buna 90’s. Perhaps if Shimano machined a shallower recess for the 70 durometer o-ring, that would have worked too. I’ve never bothered to machine a whole new caliper to see what the optimal recess would be, I just don’t care to because the Buna 90’s work so reliably.

The models of Shimano brake that I’ve seen leak from the fluid transfer port are most commonly the M485 and M486. Ive also seen some M535 and M575 leaks. Also a huge amount of R785 calipers (this is the road bike caliper). Please note that the 2 piece Shimano road bike calipers with a banjo hose connection require a different o-ring than the ones in the package that I’ve displayed above. It’s larger in diameter.

What about if you have a Shimano 1 piece caliper that’s leaking and squealing? That’s definitely happened before. Models I’ve seen this happen to include the M765, M775 and even the M800. M775’s were famous for leaking in cold weather. Here’s what I’ve done for that problem. This is definitely a more difficult problem to solve because there’s no fluid transfer port o-ring on a 1 piece caliper. This means that the source of the leak can only be from the caliper piston seals. These seals are what’s known as square cut o-rings with a pressure groove. They are a metric size with a cross section of 2mm. Not available from any usual vendor in North America. That means there’s no going to a 90 durometer version of what’s already in there because it doesn’t exist. To solve this problem, I needed to make some custom square cut 0-rings with a slightly larger cross section to seal tighter. I found 2.1mm to be perfect. Here’s a picture of the new o-rings I cut and on the left is the tool I machined to get the caliper plug out so I could pop both pistons out. 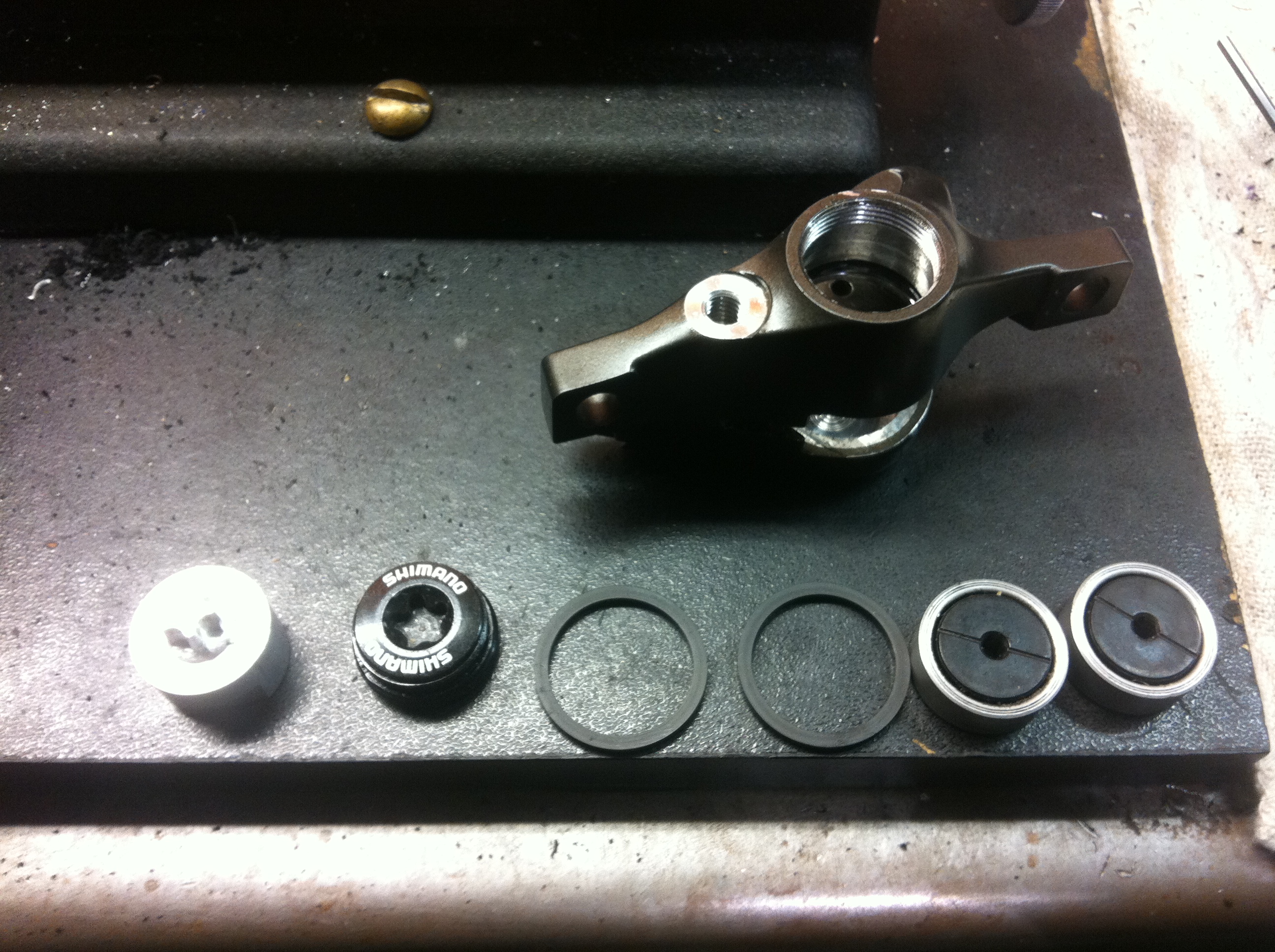 I think it goes without saying that you still need to torch your pads and rotors even after you replace the original seals. Just the fact that a leak happened probably means your pads and rotors are contaminated with oil. Another thing to note is that while Buna nitrile rubber is the go-to o-ring material for mineral oil brake systems like the ones from Shimano, it’s terrible and will break down if you try to use it on any system that uses DOT fluid. DOT fluid requires it’s own o-ring material so be aware of that if this article inspired you to do some backyard mechanics.