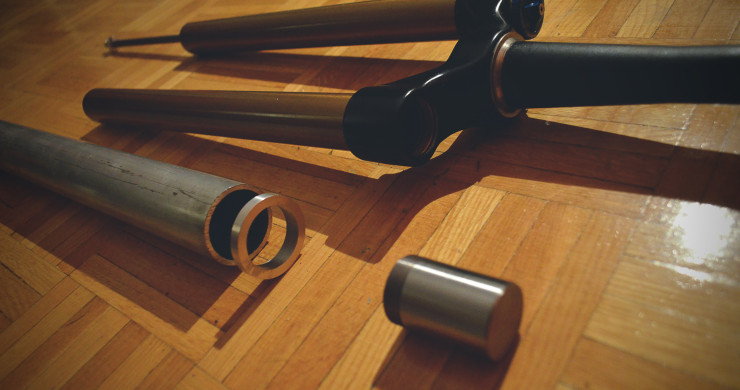 This is a problem that’s plagued the bicycle industry for years. Single crown forks that creak at the crown. Understandably, there’s a lot of stress in that area of any single crown fork. The longer the fork, the more stress. Oftentimes all it takes is a strong pull of the front brake and you can hear creaking and cracking noises that make it sound like the fork is about to break off the front end of the bike. Sometimes this noise can be heard on brand new bikes with brand new single crown forks. Sometimes it’s a very expensive and high end fork. Fox I’m looking at you. All it takes is a google search of creaky steerer tubes and you’ll get pages and pages of people complaining about their forks. Very often it’s Fox. Sometimes the creaking can be coming from the steerer tube, sometimes its the stanchions. Other lucky people can get a creak from a combination of both.

So what’s the cause? The source is something quite well known in the world of mechanical engineering. It’s called fretting corrosion. Here’s an article about fretting.  http://en.wikipedia.org/wiki/Fretting

So how does this apply to bicycles and single crown forks? First we need to acknowledge that most crowns on single crown forks are simply painted, not anodized. The steerer tubes and stanchions are usually anodized but the crowns are not. If you press a steerer tube or stanchion out of a crown, you’ll see that most crowns are bare aluminum on the inside. Why is this a problem? Part of the answer lies in uncontrolled oxidation. If you look at a pressed out stanchion, you’ll see a few random spots of oxidation where it’s transferred from the bare aluminum to the stanchion. The spots aren’t smooth and sure as hell aren’t even. This is a problem.

How does this differ from anodizing, which is also an oxide layer? Anodizing is a controlled oxidation process that grows the oxide layer on an aluminum part nicely and evenly. The result is nice, smooth, and most importantly even. When a part is anodized, it protects the aluminum from further uncontrolled oxidation. So what happens when a crown isn’t anodized on the inside? Over time, a small amount of oxidation will begin to form as a result of the bare unprotected aluminum inside the crown. Keep in mind that an oxide is no longer aluminum but rather a ceramic material that’s harder than aluminum itself. So oxide begins to form inside the interference fit between the stanchions and the crown. Every time you hit the front brake and stress the crown, that creaking and cracking noise can be blamed on the little pieces of ceramic moving around and crunching between the interface of the stanchions and crown.

If you read the article about fretting, you’ll understand that it can cause of bit of mechanical wear as well. This makes press fits a little looser, which adds to the problem because it allows for more microscopic movement, which then adds more to the fretting. It becomes a vicious cycle. So is there a solution to stop this creaking other than having fully anodized, welded or 1  piece crowns?

The answer is yes. There’s a miracle product from a company called Loctite. It’s called retaining compound and there are different types for different types of press fits.

This not only fills in the tiny spaces left by fretting, it does an amazing job of gluing any type of metal press fits together. They become very difficult to remove without using heat, that’s just how solid the press fit becomes after using this product. It also provides a barrier between the surfaces to help stop the corrosion from transferring from one surface to another. Cleaning off the oxidation that’s already there in combination with using this product, I’ve had creaky steerer tubes and stanchions silenced for good. I’m still riding a fork that had a creaky steerer tube back in 2010. It’s been 5 years now and it’s still holding strong and my customers have enjoyed the same benefits.

So who are the best candidates for this service? Interestingly it’s the most creaky, beat up and oxidized forks that are the ones that become the most solid and creak free after this service if performed. At first this may seem counterintuitive. Customers sometimes don’t expect the creaking to be completely gone on their old beat up forks because of how much they creaked originally. To their surprise, after the loctite treatment the fork doesn’t even utter one tiny creak. Forks that are relatively new and creak free are actually the worst candidates for the loctite treatment. People sometimes email me about preemptive treatment on their new forks and the long term results of this aren’t great so I don’t recommend it.

So old beat up uppers stay creak free for years after the treatment and brand new tightly fitted uppers don’t. How can this be? The answer to this becomes clear when you examine the surfaces inside the press fit of a fresh fork versus an old beat up oxidized one. A brand new fork has very smooth and tight fitting surfaces inside the press fit. This means when pressing a stanchion into a crown with loctite retaining compound, the loctite is largely wiped away since there are no grooves on the outer surface of the stanchion or the inside surface of the crown to retain the loctite. On a beat up used fork, this is completely different. While the stanchion stays relatively smooth, the inside surface of the crown displays pitting (small indentations) from the fretting corrosion that happened over time. Once the oxide is cleaned out, those indentations are the perfect retainer for loctite during the pressing of the stanchions or steerer tube. The results are an unbelievably rigid and creak free upper assembly.

This is a bit of revelation in the bicycle world but it’s been known long ago to anyone who’s done research in anaerobic compounds (loctite) and press fits. The research has shown that it’s actually better to loosen the tolerance of a press fit slightly and then have some means to retain anaerobic compounds like adding small grooves or indentations. This probably sounds like dangerous witchcraft to bike companies but eventually once everyone catches on  to what’s been known in other industries for years, we’ll see everyone doing this in one form or another. 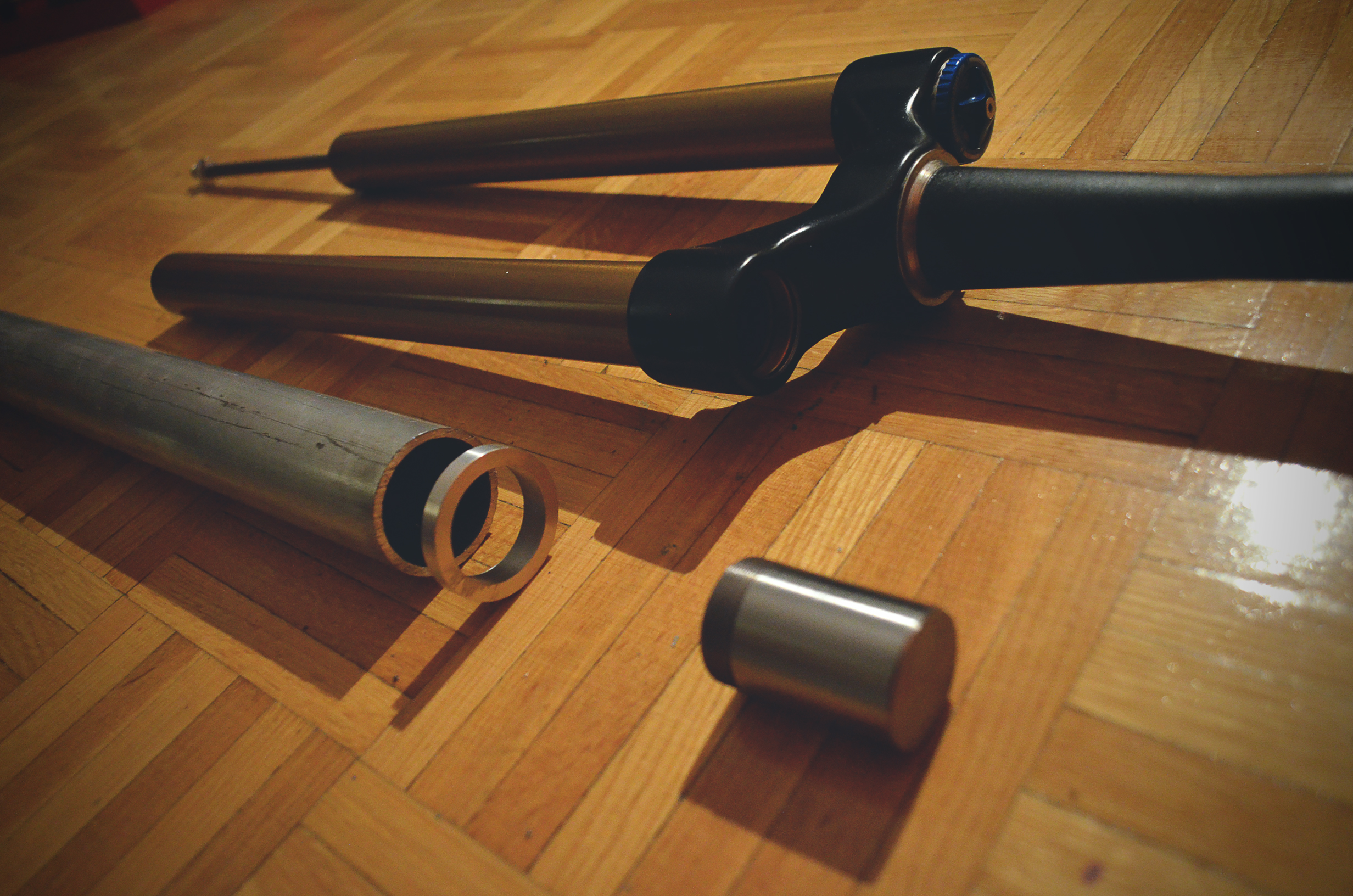 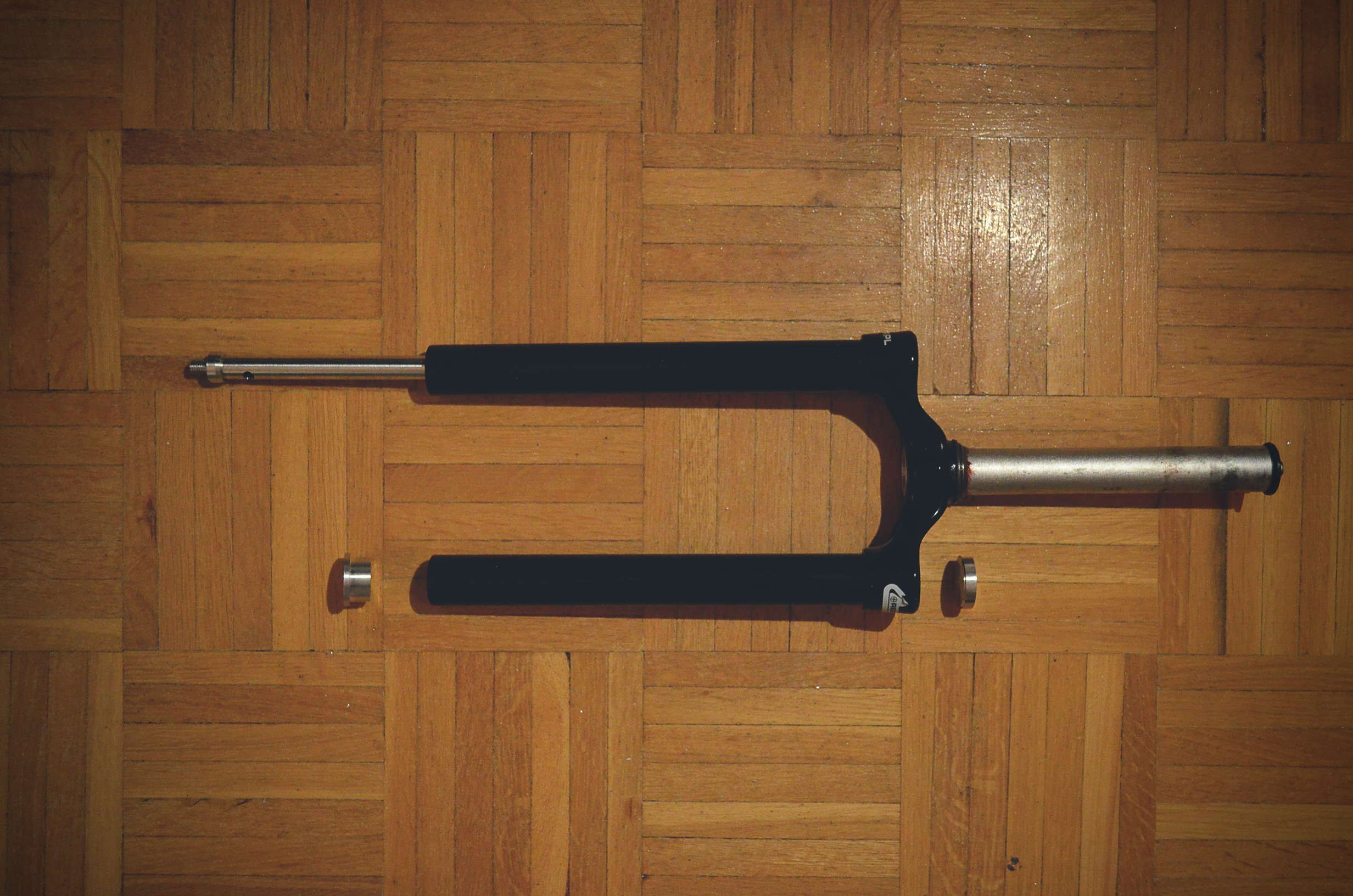 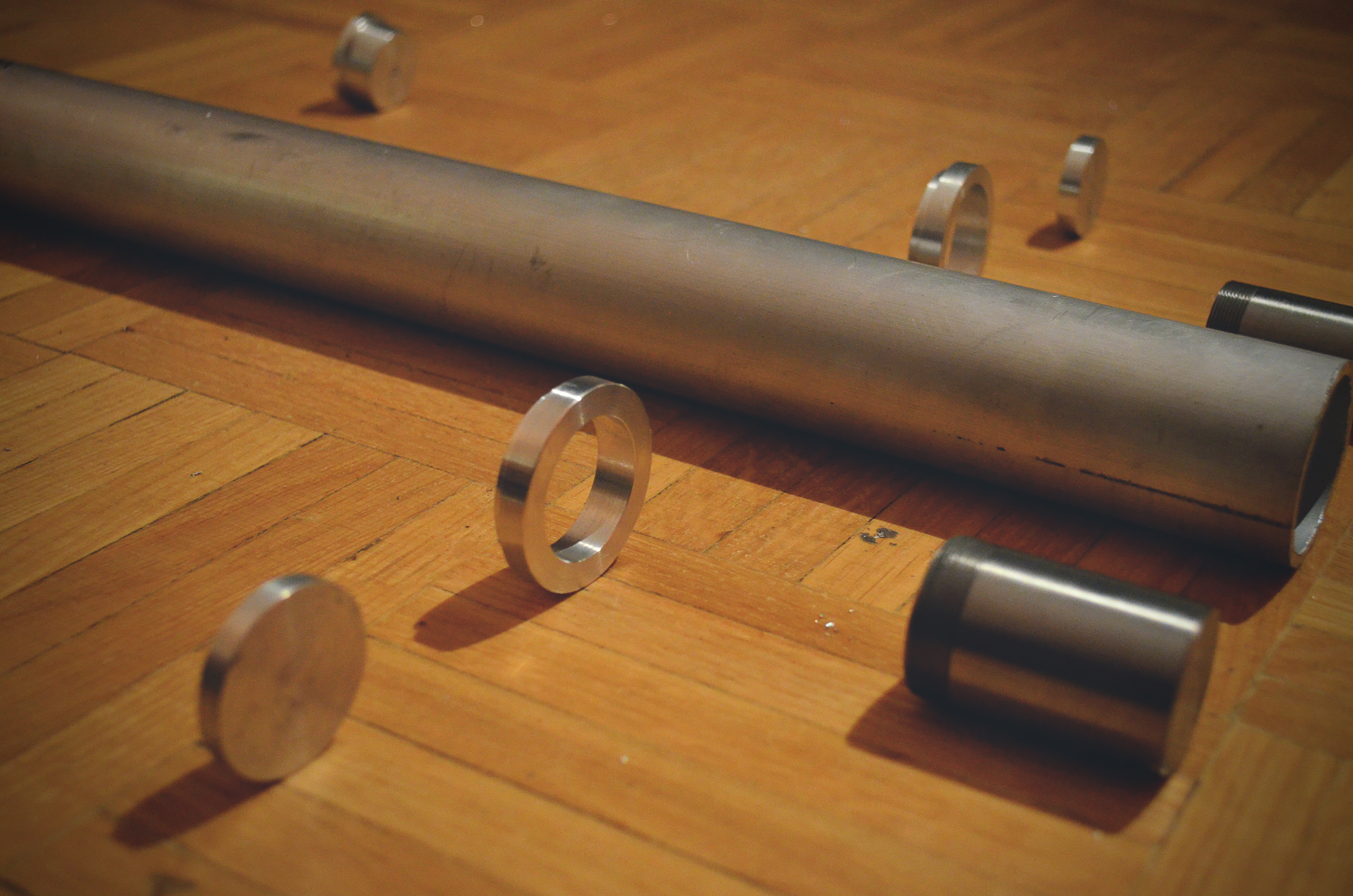 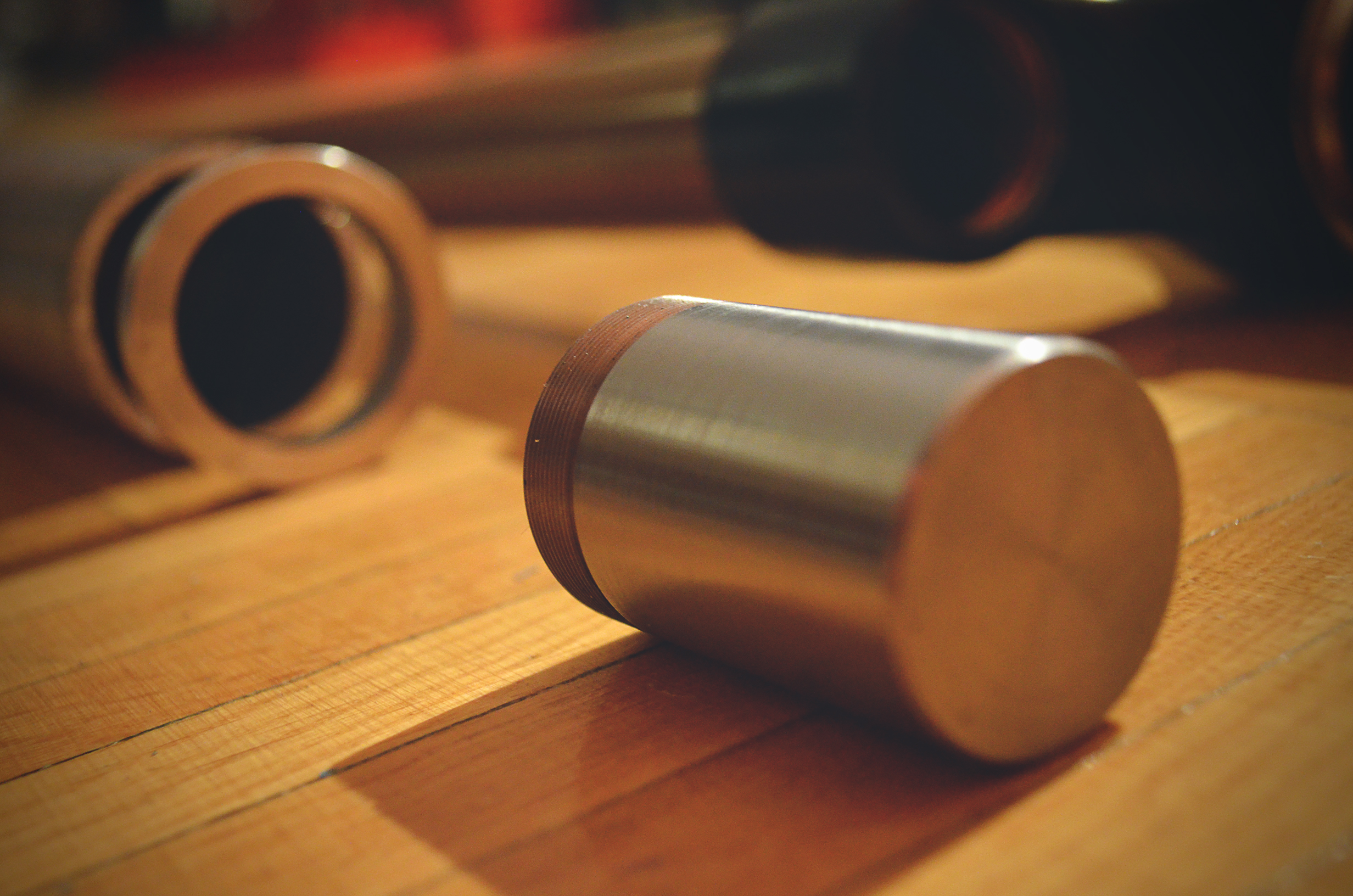 Here’s a whole set of pressing tools I made for a customer. 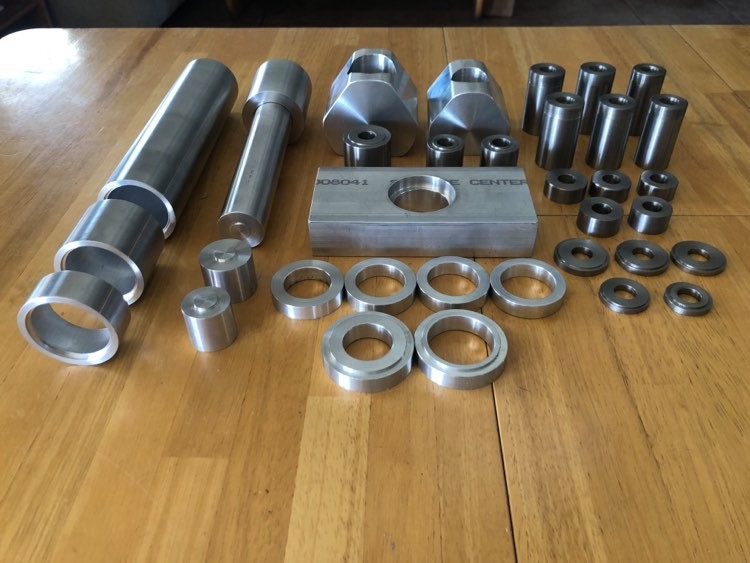